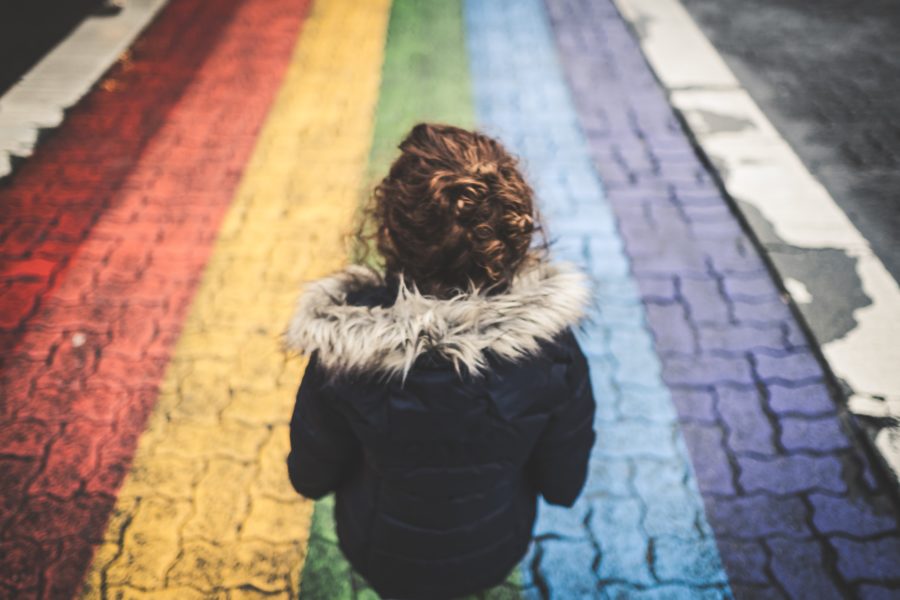 The Palette of Identity

Remember middle school? Or maybe junior high?  Chances are these times make you cringe as you recall the awkwardness, major body changes and social challenges you faced as you were “coming of age.”  (If you can’t relate, lucky you. Or perhaps you have blocked it out or are in total denial.)

For most of us, this was the time when we rapidly developed and grew into something different than our childhood selves. Braces, glasses, awkward chubbiness—all captured in a school picture to forever remind us of the ugly duckling trapped inside our future swan. This was a time of trying to figure out where we fit in and what we were good at. But too often, these lessons came from failure in these areas…what were we bad at?  Who didn’t we connect with?

I remember in 6th grade, I thought I was sporty. Ha! I signed up to play kickball because I could kick and liked running fast.  Well, not so much. I was a year younger than the kids in my grade and about 3 sizes smaller. The girls on the kickball team were tall and strong.  I vividly recall the first game when I was up to “bat,” I popped a fly ball, and the girl who caught it decided to chase me to first base and tag me with the ball just to be sure I knew I was out. It was a slow-motion collision of a HUGE red ball with tiny 11-year-old me that sent me flying 10 feet in the air. I landed on my back and had the wind knocked out of me from all sides. I instantly cried, walked off the field and never returned to team sports again because apparently I wasn’t a good kicker and didn’t run quite fast enough. Needless to say, I learned that I was not a sporty girl, so I could smudge that off of my identity palette. I didn’t like the uniforms anyway.

I continued to try new things. Again and again, I found myself wandering through experiences and groups as I learned what I liked and where I excelled.  I eventually made my way to cheerleading, which then led me to dancing and acting, and then to all the drama kids who became my tribe. But it took awhile.

The uncertainty and awkwardness of pre-teen and early teen years are practically inevitable. The onset of hormones and a desire for autonomy slam us all head-first into a wall of doubt and identity crises.

As I sit with my daughter who is now in her first year of high school, I listen to her chat about the new girls she is meeting at her lunch table and all their different personalities and talents. She shares how during the first week, they went around the table to say their names, what school they came from, what clubs they want to join and what sexual orientation they are. Yes that’s right: how they identify sexually.  I never thought to even ask that question when I was 14, and I am not sure if I even thought that much about it. I had best girlfriends and puppy love crushes but didn’t over analyze or label my fluctuating feelings.

The girls at her lunch table were bi, pan, ace, trans, and other descriptions I had never heard of. A few were gay, and some were straight. Whoa! New on the adolescent identity palette is a whole gigantic area that I never had to select a category from. The pressure.

I believe that becoming aware of—and coming to terms with—one’s sexual orientation can take some time. It is quite possible to be emotionally attracted to one gender but physically attracted to the other, which can feel very puzzling and lead to conflicting feelings. It is quite normal to feel somewhat uncertain, or ambivalent about one’s sexual orientation during these evolving years, so asking this question at the lunch table is like asking a 14-year-old what career they are going to have in their 30’s: Some know, but most aren’t even thinking about it!  It isn’t a surprise that the most popular answer around the table was ‘ace’ for asexual, which means without sexual feelings. It must be so confusing for these kids, especially when being different and something other than heterosexual is increasingly celebrated in our culture.

You may be offended or disagree with me. You may say “Let the youth speak their truth!” and “Hooray for sexual awareness and the freedom to express and be what we are born to be!”  I just don’t want to rush a final answer. I want to take a little pressure off of this already-chaotic time for my teens.

I also want to remember that the palette of our identities is complex and rich. We’re all born with multiple colors in our palettes, but it is always up to us what colors we use on the canvas of our lives. In order to create a masterpiece, we may have to try some colors that we end up wiping off or leave some on the palette that don’t fit with the other colors we’ve chosen. As masterpieces in the making, I don’t want my kids to be pressured into picking their colors too early, and I don’t want them to think that their sexual orientation is the most defining piece of their identity.

I love my three kids no matter what, just the way they are. I want them to fully discover who they are and how they are called to serve, always loving others and living with God at the center of their lives. I want their masterpiece to be created with love and wisdom—never with pressure to be boxed in.